How to stop a servo motor when can’t reach a specific position?

Home/Arduino/How to stop a servo motor when can’t reach a specific position?

How to stop a servo motor when can’t reach a specific position?

Servomotors are very useful components when we have to make movements with precise angles.
In this article I will mainly refer to arduino controlled servo motors, in particular the servo motor models are: Sg90, ds3115, ds3220, ds3225, ds3235, etc .. 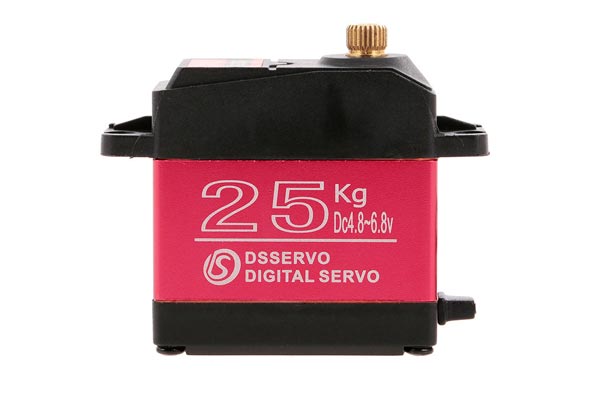 There are two methods mainly to stop the servo: sensor on off, current control.

On off sensor or commonly known as endstop sensor for 3d printers and cnc is a sensor that opens or closes a circuit allowing the arduino to recognize the obstacle. The sensor is useful when the servo touches a component and activates the sensor. In the event that the object changes position it could move away from the sensor and therefore change its state, vice versa if the object approaches the sensor the sensor will not detect further changes. It may be useful to position three of these sensors at different distances and when one of the two external sensors is triggered make the servo move to position itself again. Personally it is not a method that I particularly like and a pressure sensing system could be useful, do you know anyone? leave it in the comments.

How to size the resistance? Let’s do two calculations: servo ds3225 the stall current is 2A at 5V and we use a 1ohm resistor we use the equation P = R * I ^ 2 = 4A * 1 ohm = 4 W. By connecting to the arduino analog pin we can read values ​​from the serial and set a value limit beyond which to block the servo.

In the hope of having been helpful if you have any questions or corrections do not wait to email me.